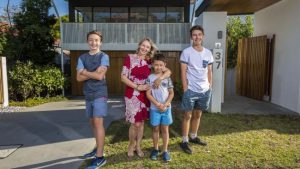 After living in Hong Kong as an expat for 17 years, Diana Edwards, her husband and three sons were looking to come home to Brisbane.

Having lived away for so long, she initially thought property prices would be “at a lower level”, although she found Brisbane generous in terms of space.

“For the price of what we owned there (in Hong Kong) we could buy an absolute mansion in Brisbane, because you really do pay for space there,” Ms Edwards, 49, said.

She’s not alone. Australian expats have shown increasing interest in the local property market, mindful of currency moves as well as personal factors such as children’s schooling.

The level of inquiry has come in light of a five-year bull run in the east coast capitals, with buyers not wanting to miss out on the runaway price gains.

Australians in high-powered global roles appear well placed to get into the market, with those living overseas earning an average $US135,755 ($A175,097) a year, according to a recent HSBC report.

Some expats are buying for investment only and hope to take advantage of the tax benefits, while others want their children to start high school in Australia, says Meighan Hetherington, director of buyer’s agents at Property ­Pursuit.

She has noticed an increase in inquiries from this market more recently. “People do have a little bit more of a finger on the pulse — perhaps the expat life isn’t for them forever,” Ms Hetherington said.

From Sydney, Propertybuyer managing director Rich Harvey noted that if expat buyers had put cash in a savings account over the last five years with hopes of buying when they returned, they would have missed out on price growth of about 80 per cent.

“That’s the reason why they want to get back here, they don’t want to feel like they’ve missed the market,” Mr Harvey said.

James McCowan, director of sales at Sydney Sotheby’s Inter­national Realty, has seen an increase in buyers over the last two years as the Australian dollar has largely held in the US70c range, making properties here look more affordable than before.

The demand shows the different perspective overseas buyers can have of elevated local prices.

“Although the market has been reasonably strong here, (the strong level of inquiry is) saying to me that there’s still perceived value,” Mr McCowan said.

Some purchasers engage buyer’s agents to take photos or video and guide them through the home using Skype or Facetime. Others make a flying visit to view the home.

Virtual reality could be the next step, although not all buyers have the right headgear yet.

“The problem with the expat buyer to a real estate agent — they don’t want to sell their house to an expat … because they haven’t got a house for sale,” he warns. “There’s no turnover.”

Should you rent back to the sellerMedia